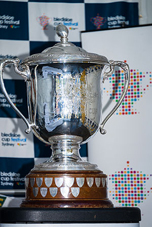 A trophy is synonymous with being a tangible gift from an organisation, recognising peak performance from sporting, academic and business fields.

In antiquity BCE, ancient Greeks left battlefields in foreign and outlying regions decorated with effigy like figures bearing shields, weapons and battle regalia. It is thought that this is where the modern English word “trophy” was forged. The ancient Greeks and Romans set the scene for commemorating these victorious war events with trophies. So it evolved that war artifacts were assembled to celebrate achievement on the battlefield. In some cases trees were adorned with the standards and weaponry of the defeated army.  In primitive societies body parts were often used as trophies. Practices such as headhunting, scalping and  mass mausoleums were part of the culture of some tribes and the collections were viewed as trophies.

The laurel wreath, pictured on the left, was given for more peaceful activities such as art, poetry (Ovid pictured as poet laureate) and games. The laurel was famously used as the trophy in the ancient Greek Games.
Big game hunters also kept “Trophies” of animals that they had killed. They were mostly the heads of animals, which were hung on the walls of homes.

However, today we have many awards such as the Booker  and Archibald Prize. In the scientific field the Albert Einstein Award is a major medal in world scientific achievement.

The laurel was given as the trophy in most cases in both the Greek and the Roman cultures. As time progressed into the bronze age some athletes in Greece received amphoras, usually filled with oil. The amphora in the household was generally a vessel for wine or oil.  Many of the artifacts were made at great expense particularly with the forging of metals such as bronze and silver. The prizes varied depending on the wealth of the community in which the games or events were held. The chariot races of the ancient world would probably go back to the invention of the chariot wheel. These were major events which required mighty venues known as hippodromes. Chariot races were added to the Olympic Games about 680 BCE but were not the main event. The 195 meters male footraces were the epitome of the sporting festival.

In time, many of the events in 5th century CE Rome became professional and the winners were given money in lieu of a laurel, amphora or cup.

In the 17th century CE the silver cup emerged as the trophy of choice for many events including horseraces. In the late 17th century the Kyp Cup became a popular trophy style for all sports including horse racing. This trophy cup was essentially a smaller cup with two handles and may have also had a lid. They were very often sterling silver and very valuable.
Chalices and cups were awarded to winners of sporting endeavour in the 17th century New World events. The famous Kyp Cup was awarded in America in 1699. It is fair to say that even today the silver cup, now usually silver or nickel plated, is a prestigious trophy.

The trophy is the symbol of the game. The teams and players enter the halls of fame when their names are engraved onto the face, sides or bases of these mementos. In Australia we have so many famous trophy cups and sporting awards as part of this nation’s love of sport – The Davis Cup, Melbourne Cup, Cricket, AFL, Rugby Union, Rugby League, Netball etc.